The All Saints Church Has Had A Little Work

In August 2002, an inspection was done to determine the condition of our church structure.  The age of the church and the environment were beginning to take a toll on the building.  Various elements in the air, temperature and seasonal weather fluctuations deteriorated parts of the structure and the materials used in the construction.

Steve Psaros, general restoration chairman, assisted by Tom Banketas and George Payne and supported by president Mark Madias and the entire Parish Council asked the parishioners to help “Preserve the Legacy of Our Parents and Grandparents” by supporting the 2003 Restoration Project.  The project included cleaning of the dome stainless steel, installing new roofing materials on all twelve roofs, restoring brick work and precast stone, restoring front steps and entrance ramps, replacing the front entrance and repairing deteriorated plaster on the interior of the church.  The committee hired a structural engineer who inspected the building and an architect who made recommendations on how the repairs could be accomplished, what materials were needed and in what order they would be accomplished.

The restoration project of 2008 involved many improvements to the Nave of the All Saints Church.  During the three months of work, Church services were held in the Hellenic Memorial Hall.

The pews were removed, scaffolding was erected, chandeliers were taken down, the stained glass dome windows were removed and taken to the Pittsburgh Stain Glass Company to be refurbished and the dome was cleaned.

A number of items in the church as well as throughout the office space were in need of attention. The red carpet in the Nave was removed, revealing the beautifully-designed terrazzo floor.  Inquiry was made to patch the damage done by the carpet nails to the terrazzo.  A contractor indicated that replacing the flooring would cost over $100,000, and that it would be impossible to patch the existing terrazzo color.  The decision was made to keep the “character” of the existing terrazzo. 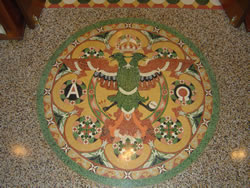 The Hellenic Memorial Hall restrooms were made handicapped accessible with new tile, mirrors and washbasins through a generous donation from F. John Frangakis. The church kitchen ovens were replaced through a generous donation from Michael Psaros.  The upstairs offices were upgraded.  New glass block windows were installed.  The upstairs carpeting was replaced with new floor tile. New wall air conditioning with new wiring was installed in three locations.  All office and restroom area doors were replaced 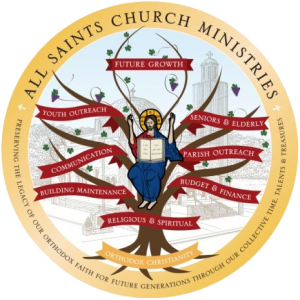 In the fall of 2012, Father Frank Milanese and a number of key leadership parishioners attended a presentation on the new Stewardship Program of the Greek Orthodox Archdiocese of America at Holy Trinity Church in Ambridge, PA.  After many months of planning and preparation, the new Stewardship Ministry program was presented to the entire All Saints community through a series of presentations.

All Saints Church Ministries was inaugurated in 2013 as a means of “Preserving the Legacy of our Orthodox Faith for Future Generations through our Collective Time, Talents and Treasures.”  Through its initial seven ministry components including Youth Outreach and Senior/Elderly Ministry, personal contact and attention would be given to a greater number of our parishioners, and help us turn the administrative focus from “the business of the church” to “the ministry of the church.”

The first effective application of All Saints Church Ministries was through the Senior/Elderly Ministry.  Nick Tranto, one of the Senior Ministry co-chairs attended a meeting of the Senior Citizens and asked, “What do you need?  What can we do for you?”  That simple question led to the largest single renovation and expansion project of the church (see below).  Since the inauguration of All Saints Church Ministries, more parishioners are involved in more areas of church ministry than ever before.  This has lead to a greater sense of ownership and partnership, as well as greater participation in parish events.

In 2014, the hanging votives and the Emmanualia candelabras in the Nave were restored.  Electrical work was also done to insure that the votives would remain lit all the time.

The idea of installing an elevator at the church began in the 70’s and was considered too expensive at that time.  Forty years later, many of those same people were now having difficulty getting into the church.  As a result of All Saints Church Ministries reaching out to the community Senior Citizens as well as recent experiences of icing on the front stairs and ramp of the church, parish council president Nick Latousakis, with the support of the Parish Council, authorized engineering inspections of the present building to see what could be done.  The first official meeting for the discussion of the project occurred in March 2013.  After many inquiries and reports, and with the approval of the General Assembly, the All Saints Elevator Annex project was formulated.  The actual groundbreaking for the elevator annex occurred on Sunday, August 10, 2014, followed by construction beginning on August 13, 2014.

Upon reading in The Vineyard that the All Saints community would embark on this daring project, two major grand benefactors emerged to contribute the majority of the necessary funds:   Michael & Robin Psaros and F. John & Joyce Frangakis.  The remaining balance was raised from parishioners and local community leaders as well as “friends of All Saints”.

The elevator annex was the first major expansion and construction at the Church in sixty years.  A new pangari, a ‘quiet room’ and handicapped powder room were added as well as additional storage space.  Special care was taken to insure that the new construction would match as closely as possible to the existing edifice, maintaining the church’s appearance from the outside as well as thoughout the interior space.  Due to the generosity of our grand benefactors as well as the many other contributors, the entire project was paid for with no external loans to the church.  Special thanks go to the building committee including: Fr. Frank Milanese, Nick Latousakis, Alexandra Melonas, Stephanie Kamarados, Nick Tranto, George Payne, George Antoniou and Ted Glyptis.

Besides providing a major source of income to our parish, the Annual Weirton Greek Festival provides our parish the opportunity to share our culture and heritage with Weirton and the greater upper Ohio Valley. Originally built in the late 40’s, the kitchen area is often cold in the winter, warm in the summer and almost unbearable during the festival.  In early 2015, the Parish Council voted to install two new air conditioning and heating units in the kitchen which were subsequently donated by the Michael and Robin Psaros Family.  These units have proved their worth during subsequent festivals!

An opportunity arose in the summer of 2015 to purchase property directly across from the main parking lot of the church.  Parish parking is at a premium with regular Sunday worship parking overflowing into the public lot adjacent to the church.  After initial approval from the September General Assembly to examine all the details necessary to acquire the property, remove the existing building and install a new parking lot, the West Street Project Committee made a proposal to the General Assembly on December 6, 2015.

The proposal was immediately approved by those in attendance.

Initially, funds were allocated from the parish Building Fund with the intent to replace them through fund-raising to the parishioners and business community. Ted Glyptis was named committee chairman.  Committee members included: Nick Latousakis, George and Dianne Kohelis, Dean Makricostas, Gary Mastromichalis, Alexandra Melonas, George Payne, Steve Psaros and Nick Tranto.  Work on the additional parking space was completed in the summer of 2016.

All this work has been accomplished through the generosity of parishioners and friends of All Saints Church who love God’s House
and want to see it serve many generations yet to come. We hope you will be inspired to come and take a tour of our facility.